- January 21, 2012
I wanted to contrast the ideas between two individuals. I am in agreement of course with James Madison. James Madison was a founding father of the United States and was a devoted Christian. Karl Marx was the father of Communism and a devoted Atheist. He also was devoted to the abolition of religion, especially Christianity. Our Constitution and laws are based on Biblical principal. Marx based his on Secular Humanism and Evolution. Also, it looks like there are many in our government who would like to adopt Marx's Communist Manifesto and replace our Constitution. 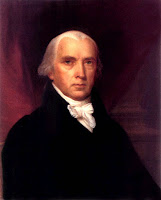 "The rights of persons, and the rights of property, are the objects, for the protection of which Government was instituted."  James Madison

"The theory of Communism may be summed up in one sentence: Abolish all private property."  Karl Marx