Traditions, Some Family History, and a Little-Bit on God's Grace 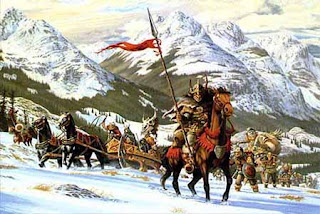 As I read God's Word and look around me, I realize that the world has gone crazy.  As I grow older, I understand and feel differently than I once did and see that change is inevitable. I try to tell my children that even though there is always change in this world, God never changes. We can take comfort in that. There has a been a push the last several years to rid our culture and churches of tradition.  I understand that there are some things that need to change, but there are other things that don't. Some traditions are important to me. Christianity is a religion with many different traditions. It is difficult to know which ones are worthy to keep and to throw away.  I think as long as the tradition doesn't supersede the Bible's authority, then the tradition is OK. Much of what we celebrate by way of tradition is a matter of preference, but we can fall into error when we make that tradition a mandate. There are many examples of this in the Bible.

As I was thinking about this subject, the history of my family came to mind. I find it interesting that my relatives came from many different walks of life and many different perspectives. I have found that there are many life lessons to learn from their successes and failures.  There was sin in my family tree, and I know that there also was goodness and faith by the grace of God. I will site a few of the good.

My mom's family on one side came over from Germany and brought their Lutheran beliefs to the land. I grew up in the Lutheran church and learned much about the Sovereignty of God, the Reformation, and the history of faith.  My grandmother's grandmother was a Cherokee Indian woman from Oklahoma. Her family had traveled down the "trail of tears."  She loved God and was a Methodist. There is a story of one of my great grandfathers. I don't know how far back exactly, but I believe it was in the early 1900's and on my Dad's side. He was a good ole Baptist from the South who owned a local general store. One day he gave a loaf of bread to an African-American family because they were hungry.  Later that night, the KKK came to intimidate him for that good deed. His wife told them that he was out of town on business. It is my understanding that he hid under the house while she spoke to them.  I don't know how many men there were, but I believe it was enough to do some damage.  He and my great-great grandmother were never bothered again, but I understand that the intimidation didn't work. He kept selling bread, and giving to those in need when he could. They lived in Pleasant Hill, Louisiana during that time. I am proud of that history. It was a difficult place to be I imagine. There are so many more stories that I could tell.  I did find out that I am kin to Daniel Boone's wife. She is in my family tree on my Dad's side. Many of them were Presbyterians. I thought that was pretty cool. I also have ancestors that date back to medieval times and before.  I have barbarians in my family tree from the Gaelic tribes!  If it weren't for Christianity, they would have never been civilized, nor would they ever have found faith by grace.  I am thankful to Saint Patrick for that and teaching the Trinity.

History and traditions is something that can bring insight and value when it comes to life. In modern times we have reclaimed some Christian traditions such as viewing all men as equal, many forms of tolerance, freedom, and much more.  Our modern society with the help of many free thinking Christians have contributed to the subjects of science and technology along with many other subjects. What I find strange is that as we gain in many areas, we are losing in others. I am concerned that we are abandoning the principles of faith that made our dwelling-place a blessing. If we desert God, His Word, and the grace that He has bestowed upon our land, I fear for our future. If we abandon God and replace the clear teaching of Scripture with the finite edicts of mankind, I believe we will be in for a great demise.  I encourage you to not be so eager to throw away all tradition. Learn from the good traditions of the past and adopt new traditions to replace the bad ones. Search out your family history as far as you can. You might find some great stories.  If we are honest and willing to listen, we can learn from the mistakes of the past and apply their teaching to our future.  If not, history will repeat itself.  Never throw away the tradition of Scripture. Reform begins with what we believe and what we are willing to do with it. May God's grace bless this land and all who dwell in it. Amen.
personal