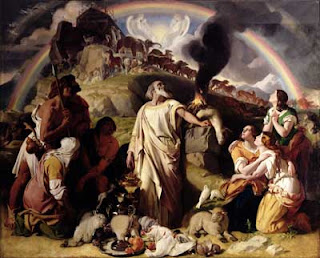 
Matthew Henry on this:

8 And God spake unto Noah, and to his sons with him, saying,   9 And I, behold, I establish my covenant with you, and with your seed after you;   10 And with every living creature that is with you, of the fowl, of the cattle, and of every beast of the earth with you; from all that go out of the ark, to every beast of the earth.   11 And I will establish my covenant with you; neither shall all flesh be cut off any more by the waters of a flood; neither shall there any more be a flood to destroy the earth. 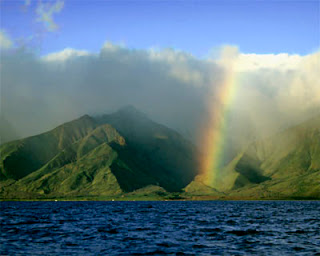 Here is, I. The general establishment of God's covenant with this new world, and the extent of that covenant, v. 9, 10. Here observe, 1. That God is graciously pleased to deal with man in the way of a covenant, wherein God greatly magnifies his condescending favour, and greatly encourages man's duty and obedience, as a reasonable and gainful service. 2. That all God's covenants with man are of his own making: I, behold, I. It is thus expressed both to raise our admiration—"Behold, and wonder, that though God be high yet he has this respect to man," and to confirm our assurances of the validity of the covenant—"Behold and see, I make it; I that am faithful and able to make it good." 3. That God's covenants are established more firmly than the pillars of heaven or the foundations of the earth, and cannot be disannulled. 4. That God's covenants are made with the covenanters and with their seed; the promise is to them and their children. 5. That those may be taken into covenant with God, and receive the benefits of it, who yet are not capable of restipulating, or giving their own consent. For this covenant is made with every living creature, every beast of the earth.

II. The particular intention of this covenant. It was designed to secure the world from another deluge: There shall not any more be a flood. God had drowned the world once, and still it was as filthy and provoking as ever, and God foresaw the wickedness of it, and yet promised he would never drown it any more; for he deals not with us according to our sins. It is owing to God's goodness and faithfulness, not to any reformation of the world, that it has not often been deluged and that it is not deluged now. As the old world was ruined to be a monument of justice, so this world remains to this day, a monument of mercy, according to the oath of God, that the waters of Noah should no more return to cover the earth, Isa. liv. 9. This promise of God keeps the sea and clouds in their decreed place, and sets them gates and bars; hitherto they shall come, Job xxxviii. 10, 11. If the sea should flow but for a few days, as it does twice every day for a few hours, what desolation would it make! And how destructive would the clouds be, if such showers as we have sometimes seen were continued long! But God, by flowing seas and sweeping rains, shows what he could do in wrath; and yet, by preserving the earth from being deluged between both, shows what he can do in mercy and will do in truth. Let us give him the glory of his mercy in promising and of his truth in performing. This promise does not hinder, 1. But that God may bring other wasting judgments upon mankind; for, though he has here bound himself not to use this arrow any more, yet he has other arrows in his quiver. 2. Nor but that he may destroy particular places and countries by the inundations of the sea or rivers. 3. Nor will the destruction of the world at the last day by fire be any breach of his promise. Sin which drowned the old world will burn this. 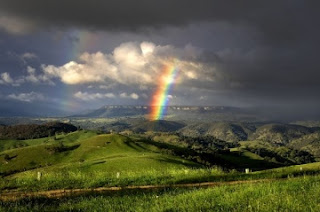 Articles of agreement among men are usually sealed, that the covenants may be the more solemn, and the performances of the covenants the more sure, to mutual satisfaction. God therefore, being willing more abundantly to show to the heirs of promise the immutability of his councils, has confirmed his covenant by a seal (Heb. vi. 17), which makes the foundations we build on stand sure, 2 Tim. ii. 19. The seal of this covenant of nature was natural enough; it was the rainbow, which, it is likely, was seen in the clouds before, when second causes concurred, but was never a seal of the covenant till now that it was made so by a divine institution. Now, concerning this seal of the covenant, observe, 1. This seal is affixed with repeated assurances of the truth of that promise of which it was designed to be the ratification: I do set my bow in the cloud (v. 13); it shall be seen in the cloud (v. 14), that the eye may affect the heart and confirm the faith; and it shall be the token of the covenant (v. 12, 13), and I will remember my covenant, that the waters shall no more become a flood, v. 15. Nay, as if the Eternal Mind needed a memorandum, I will look upon it, that I may remember the everlasting covenant, v. 16. Thus here is line upon line, that we might have sure and strong consolation who have laid hold of this hope. 2. The rainbow appears when the clouds are most disposed to wet, and returns after the rain; when we have most reason to fear the rain prevailing, then God shows this seal of the promise that it shall not prevail. Thus God obviates our fears with such encouragements as are both suitable and seasonable. 3. The thicker the cloud the brighter the bow in the cloud. Thus, as threatening afflictions abound, encouraging consolations much more abound, 2 Cor. i. 5. 4. The rainbow appears when one part of the sky is clear, which intimates mercy remembered in the midst of wrath; and the clouds are hemmed as it were with the rainbow, that they may not overspread the heavens, for the bow is coloured rain or the edges of a cloud gilded. 5. The rainbow is the reflection of the beams of the sun, which intimates that all the glory and significancy of the seals of the covenant are derived from Christ the Sun of righteousness, who is also described with a rainbow about his throne (Rev. iv. 3), and a rainbow upon his head (Rev. x. 1), which intimates, not only his majesty, but his mediatorship. 6. The rainbow has fiery colours in it, to signify that though God will not again drown the world, yet, when the mystery of God shall be finished, the world shall be consumed by fire. 7. A bow bespeaks terror, but this bow has neither string nor arrow, as the bow ordained against the persecutors has (Ps. vii. 12, 13), and a bow alone will do little execution. It is a bow, but it is directed upwards, not towards the earth; for the seals of the covenant were intended to comfort, not to terrify. 8. As God looks upon the bow, that he may remember the covenant, so should we, that we also may be ever mindful of the covenant, with faith and thankfulness.

A Word from John MacArthur to Uniformitarian Scoffers on the coming judgment in relation to the first.