I have observed a similar situation, and have fallen into laziness too. It is a trap and a miserable snare. Many will sell their soul, and do what is necessary to avoid honest labor.

30 I went by the field of the lazy man, And by the vineyard of the man devoid of understanding; 31 And there it was, all overgrown with thorns; Its surface was covered with nettles; Its stone wall was broken down. 32 When I saw it, I considered it well; I looked on it and received instruction: 33 A little sleep, a little slumber, A little folding of the hands to rest; 34 So shall your poverty come like a prowler, And your need like an armed man.

Here is, 1. The view which Solomon took of the field and vineyard of the slothful man. He did not go on purpose to see it, but, as he passed by, observing the fruitfulness of the ground, as it is very proper for travellers to do, and his subjects' management of their land, as it is very proper for magistrates to do, he cast his eye upon a field and a vineyard unlike all the rest; for, though the soil was good, yet there was nothing growing in them but thorns and nettles, not here and there one, but they were all overrun with weeds; and, if there had been any fruit, it would have been eaten up by the beasts, for there was no fence: The stone-wall was broken down See the effects of that curse upon the ground (Gen. iii. 18), "Thorns and thistles shall it bring forth unto thee, and nothing else unless thou take pains with it." See what a blessing to the world the husbandman's calling is, and what a wilderness this earth, even Canaan itself, would be without it. The king himself is served of the field, but he would be ill served if God did not teach the husbandman discretion and diligence to clear the ground, plant it, sow it, and fence it. See what a great difference there is between some and others in the management even of their worldly affairs, and how little some consult their reputation, not caring though they proclaim their slothfulness, in the manifest effects of it, to all that pass by, shamed by their neighbour's diligence. 2. The reflections which he made upon it. He paused a little and considered it, looked again upon it, and received instruction. He did not break out into any passionate censures of the owner, did not call him any ill names, but he endeavoured himself to get good by the observation and to be quickened by it to diligence. Note, Those that are to give instruction to others must receive instruction themselves, and instruction may be received, not only from what we read and hear, but from what we see, not only from what we see of the works of God, but from what we see of the manners of man, not only from men's good manners, but from their evil manners. Plutarch relates a saying of Cato Major, "That wise men profit more by fools than fools by wise men; for wise men will avoid the faults of fools, but fools will not imitate the virtues of wise men." Solomon reckoned that he received instruction by this sight, though it did not suggest to him any new notion or lesson, but only put him in mind of an observation he himself had formerly made, both of the ridiculous folly of the sluggard (who, when he has needful work to do, lies dozing in bed and cries, Yet a little sleep, a little slumber, and still it will be a little more, till he has slept his eyes out, and, instead of being fitted by sleep for business, as wise men are, he is dulled, and stupefied, and made good for nothing) and of certain misery that attends him: his poverty comes as one that travels; it is constantly coming nearer and nearer to him, and will be upon him speedily, and want seizes him as irresistibly as an armed man, a highwayman that will strip him of all he has. Now this is applicable, not only to our worldly business, to show what a scandalous thing slothfulness in that is, and how injurious to the family, but to the affairs of our souls. Note, (1.) Our souls are our fields and vineyards, which we are every one of us to take care of, to dress, and to keep. They are capable of being improved with good husbandry; that may be got out of them which will be fruit abounding to our account. We are charged with them, to occupy them till our Lord come; and a great deal of care and pains it is requisite that we should take about them. (2.) These fields and vineyards are often in a very bad state, not only no fruit brought forth, but all overgrown with thorns and nettles (scratching, stinging, inordinate lusts and passions, pride, covetousness, sensuality, malice, those are the thorns and nettles, the wild grapes, which the unsanctified heart produces), no guard kept against the enemy, but the stone-wall broken down, and all lies in common, all exposed. (3.) Where it is thus it is owing to the sinner's own slothfulness and folly. He is a sluggard, loves sleep, hates labour; and he is void of understanding, understands neither his business nor his interest; he is perfectly besotted. (4.) The issue of it will certainly be the ruin of the soul and all its welfare. It is everlasting want that thus comes upon it as an armed man. We know the place assigned to the wicked and slothful servant.

Below are the lyrics to a Bluegrass song that I like. This study made me think about it. Some of you may not like bluegrass. I understand. It is an acquired taste. The lyrics I think are applicable though. The song was played and sung by Alison Krauss & Union Station. 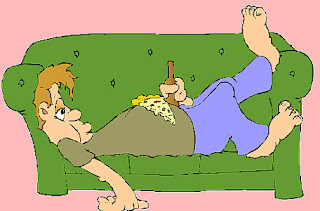 The Boy Who Wouldn't Hoe Corn

He went downtown to his neighbor's door
He had often been before
Said, "Pretty little miss, will you marry me?
Little miss what do you say?"

"Why do you come for me to wed?
Can't even make your own corn grain.
Single I am and will remain;
A lazy man I won't maintain."

He turned his back and walked away
Sayin', "Little miss you rue the day.
You'll rue the day that you were born
For givin' me the devil cause I wouldn't hoe corn."

By the way. I had to look it up. The definition of Rue is:  To lament; to regret; to grieve for; as, to rue the commission of a crime; to rue the day.