Daniel Wallace and Bart Ehrman: We Don't Really Know For Sure 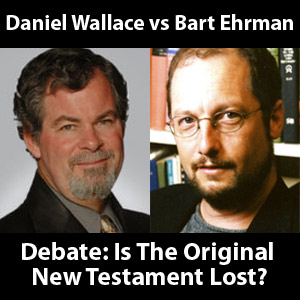 The following post came from an Independent Baptists Blog. Even though I may disagree much with the guy on some finer points of Theology, I think on the issue of inerrant preservation, he may have something. Before the post, I want to share with you a good read on Textual Criticism if you have the time and are interested. It is Titled: The Causes of The Corruption of The Traditional Text. It is a good read and is at the following link:  http://www.ccel.org/ccel/burgon/corruption.pdf

Now for the featured item. You can visit the original spot by clicking on the title.

Daniel Wallace and Bart Ehrman: We Don't Really Know For Sure

In my mind, I can hear the very normal condescending tones and expressions of James White as I begin to write this, and despite the resulting nausea, I continue to write.   The tone itself is his most effective argument.  If you don't give up, you will be sick to your stomach.  I must remind myself that it is self-imposed jeopardy on my part to look at and listen to him when he speaks.  Nobody thinks he is the smartest person in the room, the state, the country, the universe, more than James White.  But I digress.  This is about another person who has debated Bart Ehrman about the degree of error in Scripture, Daniel Wallace.

Daniel Wallace has a new blog.  So does Bart Ehrman.  Ehrman had heard that liberals don't give to make people's lives better, which is true.  This is all they have, in their own opinion, and still conservatives, which believe in the hereafter, give far more than liberals to things that make people's lives better now.  You would really think that if they believed this was all they had, that they would invest in it.  I think that you understand that generally they're just far more self-centered folks, which is why the statistic.  Ehrman's way of giving more is to write a blog that people will need to pay to read and comment, and their money will go toward reducing hunger and poverty.  Ironic that even when it is time to do something, he's getting other people to do something.  But I digress one more time.

Bart Ehrman attempted to attract more other people to give to his charity by writing a three part series about his debate with Daniel Wallace.   Bart Ehrman is a liar.  His next book, about which he is giddy with excitement, will talk about how Jesus became God.  It's not a book about how Jesus became man, the incarnation.  So don't get mixed up there.  It's going to attack the deity of Christ, the truth that Jesus is God.  And he'll write it in a very popular style to especially propagandize young people who browse at Barnes and Noble.  But I digress again.  Daniel Wallace wasn't happy with what Ehrman said about the debate.  He calls him "disingenuous," a really fancy way of calling someone a liar.   In his answer, he wrote this:

I have never said in our debates that we are absolutely certain of the wording of the text of the New Testament. So, I would agree with him that “we really don’t have any way to know for sure" . . . . He is right that classical scholars do not ‘know exactly’ what these classical authors wrote. This is what I have said regarding the New Testament, too! We may have a high level of confidence, but it never rises to the point where we know exactly with absolute confidence what the text said.


Dan Wallace wants you to know that we are not certain what the words of the New Testament are.  He agrees with Ehrman that we have no way of knowing for sure.  We don't have absolute confidence that we know what the original text said.  This isn't just Bart Ehrman.  This is Daniel Wallace.  And why would Wallace talk like that?  Because he doesn't believe in the preservation of Scripture.  He doesn't believe the Bible teaches it.  And he doesn't believe we have a perfect Bible.  It's all a matter of probability as in the study of a secular text, like Homer or Plato.

Now when Wallace writes these things, people read him now and say, "Right on, Dan!"  That's exactly their thinking.  But remember, this is not the biblical position (which is why Ehrman has a problem with it, he would say) nor the historical position on preservation.  It's what people who believe in textual criticism think. They think, say, and teach that it's all a matter of probability.  It's highly probable, to them, that we have not lost the essential teachings of the originals in the copies that we possess.  No one can be sure, but probability would lean over on the basic message of the Bible being intact.

So, the position of both Bart Ehrman and Dan Wallace is:  we don't really know.  Bart Ehrman asserts.  Dan Wallace agrees.  Now go out and live that!  It's no wonder there is a steep drop in biblical obedience, and it's only getting worse.
Bible Text Criticism Modern Skepticism