Turn Around, and Come Into Existence: Rebuilding the Ruins 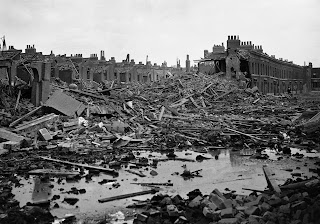 Below is a verse of Scripture that has been on my mind.

Many more questions filled my mind. What does it mean to be a like little child? Was Jesus referring to what we sometimes call: "blind faith?" Do people who claim to follow Christ know what Jesus said above in verses 3 & 4? I looked at the Greek. Literally it says:


We know that conversion is essential to salvation. There is a great emphasis on it. Some churches believe in what we call "Baptismal Regeneration," which is simply water Baptism unto salvation. Some believe that if you simply "confess" that you are a sinner, that is all you need. But what does it mean to be converted? Is it simple water baptism? Is it just vocalizing some mental recognition that Jesus died on the cross for your sins and that you are a sinner? Does salvation happen all at once? Is it gradual? Is it both? Do we just have a one-time installment? Or does it involve a lifetime of commitment? The text says "convert" and "become" as the children. So conversion happens, and then you "become" as the children? I seems like the "becoming" is essential to conversion.

I looked up "convert" and "become" in the American Dictionary Of The English Language by Noah Webster in 1828 (A more pure form of English: I recommend). It said the following of the word convert: "To change or turn into another substance or form; as, to convert gases into water, or water into ice." The literal Greek is as follows: στρέφω-strephō-to turn, turn around.

Become is as follows in Webster's Dictionary: "To pass from one state to another; to enter into some state or condition, by a change from another state or condition, or by assuming or receiving new properties or qualities, additional matter, or a new character." To verify, I looked at the Greek. It used the word γίνομαι - ginomai - which means: to become, i.e. to come into existence, begin to be, receive being.

The definition of the English and the Greek seem to show that true salvation is instant and gradual. So we are suppose to "turn around," and then "come into existence." The statement is clear, yet it isn't overly specific.

The word used for Repentance in the New Testament and the Old simply teaches that to repent, one must "turn around."

Theologians use two different terms for this: Justification, and Sanctification.

According to Webster in 1828, Justification is as follows: "The act of justifying; a showing to be just or conformable to law, rectitude or propriety; vindication; defense. The court listened to the evidence and arguments in justification of the prisoner's conduct. Our disobedience to God's commands admits no justification."

So we are declared and made to be innocent in the eyes of God the Father by "true conversion," which is paid for through the sacrifice and resurrection of Christ. Then, once we have been declared righteous:

Sanctification is defined as the following: "The act of making holy. In an evangelical sense, the act of God's grace by which the affections of men are purified or alienated from sin and the world, and exalted to a supreme love to God. God hath from the beginning chosen you to salvation (Justification), through sanctification of the Spirit and belief of the truth. 2Thess. 2. 1Peter 1."

So in essence, Justification and Sanctification go hand in hand according to Matthew 18:3&4. You cannot be justified without God sanctifying you. God will not sanctify if He hasn't justified. Sounds mysterious!

Jesus said that one must "convert and become as the little children."

We then need to ask ourselves: "What does it mean to become as the little children?"

The New Matthew Henry Commentary pp.1489 (updated English, I recommend) puts it this way: "Converting grace makes us like little children. Like children, we must not worry about anything, but leave it to our heavenly Father to care for us (6:31). We must be humble like little children. The child of a gentleman is pleased enough to play with the child of a beggar (Ro 12:16). This is an attitude that leads to other good attitudes; the age of childhood is the age of learning."

Concerning the process of conversion, Matthew Henry said the following: "When the disciples put their question, they thought they were sure of the kingdom of heaven. They were ambitious to be the greatest in the kingdom of heaven; Christ told them that if they did not have a different attitude (God given), they would never reach there. Our Lord intends to show the great danger of pride and ambition here. Pride threw the angels who sinned out of heaven, and pride will keep us out too unless we are "converted" from it."

Conversion is becoming something else, and we cannot enter heaven according to Jesus unless we do. It is becoming something that one has been declared to be, and something they will become. It is simple and mysterious. One thing I am certain of. All of the will and efforts of men alone are not enough to change the heart. It takes a supernatural act. One that only God can exact. It is my hope that men and women in our world will be given eyes to see and ears to hear, so that we may become as little children, live in peace, and enter into the kingdom of the heavens.