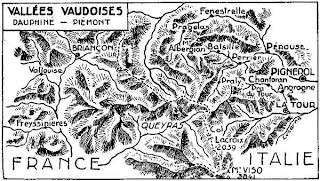 There were once many Baptist and Protestant historians that counted the history of the Vaudois as a relevant piece of information. The Vaudois were a community that reflected the light of the gospel in the tradition of the first churches during the dark ages. The way that they performed worship and evangelized was very different from the Popish religion. The Roman Catholic Church considered them a stark enemy of Christ and His Church. However, I believe the opposite is true due to the evidence given about their doctrines and manner of life. Wikipedia once had a great page up for the Vaudois, but for some reason, it was taken down and the only information you can get on the Vaudois is in conjunction with the Waldensians. The Roman Catholic Church in their attempt to rewrite history has bunched the Vaudois with the Waldensians, and I heard recently that the information that was out there concerning the Vaudois has been squelched by some historians from their Ivory tower, with no reason given. There is a movement to re-write history, and tell it from a different perspective. For years, however, the Vaudois has been told from an accurate and historical perspective. There are similarities between the Waldensians and the Vaudois, but the Vaudois existed long before Peter Waldo came along. Theodore Beza had some great information on the history of the Vaudois that I have read. I think the reason many Roman Catholic Historians have been trying to squelch this history is because it displays the Vaudois as possible true descendants of the Church at Antioch. Some even say that the manuscripts that they possessed were Latin translations from the original Greek manuscripts from Paul. In this post, I gathered some information that I found on the Vaudois. I hope you will find it interesting. The site where I obtained the information is linked in the title.


FIVEHUNDRED TO SIX HUNDRED A.D.
The Flight of the True Church to the Wilderness
It was between 500 and 600 A.D. that the Church of God was sorely oppressed by the state religion clothed with civil power, and completely overpowered, and scattered to the valleys of the mountains in all parts of the world. We shall now insert a few facts from reliable historians to show how the true followers of Jesus were indeed driven into the wilderness, where they took refuge in the rocks, and dens, and caves of the earth, yet they rejoiced in persecution, and lived in humble obedience to the will of God, being fed by Him from His word.
The historian Jones gives an account of the flight of the persecuted saints from the oppression of the harlot church seated upon the Roman beast. His account follows:
"Multitudes however, fled like innocent and defenseless sheep from these devouring wolves. They crossed the Alps, and traveled in every direction, as Providence and the prospect of safety conducted them, into Germany, England, France, Italy, and other countries. There they trimmed their lamps, and shone with new luster. Their worth everywhere drew attention, and their doctrine formed increasing circles around them. The storm which threatened their destruction only scattered them as the precious seeds of the glorious reformation of the Christian Church." -- Jones' Church History, p. 208, ed. 1837.

Valley Dwellers -- Vaudois
The fleeing Christians who escaped from the wrath of the Roman church and state, found a haven in the Vaudois," which means "Valley Dwellers." From the fact they dwelt in the valleys of the mountains they received the name "Valley Dwellers," or, in the native tongue, "Vaudois." 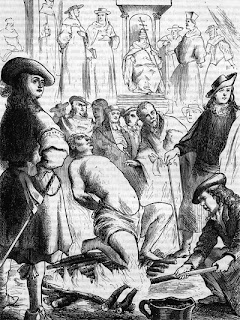 mountains and valleys of the north of Italy, and the south of France, in main, although they fled into all nations wherein they could find an entrance and protection from the persecutions of the papacy. Though these Christians were known by many names for various reasons in their new homes, yet the predominating name for them seems to have been "

The Vaudois, known as such by the world, but holding to the true Bible name, were persecuted for the true faith. They observed the seventh day of the week, according to the commandment, immersed for believers baptism, and kept the Passover, or the Lord's Supper, once a year, in the first month. -- See pages 348, 349, Persecutions and Atrocities on the Vaudois.
Gilly says of these ancient "Valley Dwellers," who had fled from the wrath of the papal church in its early centuries, and were still found abiding under the protection of the Almighty in the Waldensian wilderness in the thirteenth century:
"They occupy a mountain district . . . and yet from this secluded spot, have they disseminated doctrines, whose influence is felt over the most refined and civilized part of Europe. They . . . speak the same language, have the same patriarchal habits, and simple virtues, and retain the same religion, which was known to exist there more than a thousand years ago. They profess to constitute the remains of the pure and primitive Christian church, and those who would question their claims cannot show either by history or tradition that they were subscribed to the popish rituals, or bowed down before any of the idols of the Roman church. . . . In short, there is no other way of explaining the political, moral, and religious phenomenon, which the Vaudois have continued to display for so many centuries, than by ascribing it to the manifest interposition of Providence, which has chosen in them the weak things of this world to confound the things that are mighty.'" -- Gilly, Excursions to Piedmont, pp. 259.
From the above testimony we gather that the Vaudois had inhabited these same valleys for over one thousand years, and that they made the claim, which could not be disputed, that they were the remains, the remnant, of the true Church of God, who had fled into the wilderness. It should be noted also that no history can show these saints of God to ever have been within the fold of the Catholic Church, but had remained separate, letting their light shine, through the darkest hours of the Dark Ages.
Church History