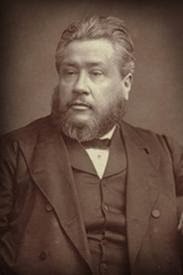 I discovered the following facts about Charles H. Spurgeon from another blog. Some of these I have read before, and some I wasn't aware of. I encourage you to read about this man and his life. He was a great Biblical teacher and proclaimer of the faith. Spurgeon also held to the 1689 Baptist Confession of which I hold to today. I hope you are helped and encouraged by this great man who was God's vessel. I was.


1. One woman was converted through reading a single page of one of Spurgeon’s sermons wrapped around some butter she had bought.
2. Spurgeon read The Pilgrim’s Progress at age 6 and went on to read it over 100 times.
3. The New Park Street Pulpit and The Metropolitan Tabernacle Pulpit—the collected sermons of Spurgeon during his ministry with that congregation—fill 63 volumes. The sermons’ 20-25 million words are equivalent to the 27 volumes of the ninth edition of the Encyclopedia Britannica. The series stands as the largest set of books by a single author in the history of Christianity.
4. Spurgeon’s mother had 17 children, nine of whom died in infancy.
5. When Charles Spurgeon was only 10 years old, a visiting missionary, Richard Knill, said that the young Spurgeon would one day preach the gospel to thousands and would preach in Rowland Hill’s chapel, the largest Dissenting church in London. His words were fulfilled.
6. Spurgeon missed being admitted to college because a servant girl inadvertently showed him into a different room than that of the principal who was waiting to interview him. (Later, he determined not to reapply for admission when he believed God spoke to him, “Seekest thou great things for thyself? Seek them not!”)
7. Spurgeon’s personal library contained 12,000 volumes—1,000 printed before 1700. (The library, 5,103 volumes at the time of its auction, is now housed at Midwestern Baptist Theological Seminary.)
8. Before he was 20, Spurgeon had preached over 600 times.
9. Spurgeon drew to his services Prime Minister W. E. Gladstone, members of the royal family, Members of Parliament, as well as author John Ruskin, Florence Nightingale, and General James Garfield, later president of the United States.
10. The New Park Street Church invited Spurgeon to come for a 6-month trial period, but Spurgeon asked to come for only 3 months because “the congregation might not want me, and I do not wish to be a hindrance.”
11. When Spurgeon arrived at The New Park Street Church, in 1854, the congregation had 232 members. By the end of his pastorate, 38 years later, that number had increased to 5,311. (Altogether, 14,460 people were added to the church during Spurgeon’s tenure.) The church was the largest independent congregation in the world.
12. Spurgeon typically read 6 books per week and could remember what he had read—and where—even years later.
13. Spurgeon once addressed an audience of 23,654—without a microphone or any mechanical amplification.
14. Spurgeon began a pastors’ college that trained nearly 900 students during his lifetime—and it continues today.
15. In 1865, Spurgeon’s sermons sold 25,000 copies every week. They were translated into more than 20 languages.
16. At least 3 of Spurgeon’s works (including the multi-volume Metropolitan Tabernacle Pulpit series) have sold more than 1,000,000 copies. One of these, All of Grace, was the first book ever published by Moody Press (formerly the Bible Institute Colportage Association) and is still its all-time bestseller.
17. During his lifetime, Spurgeon is estimated to have preached to 10,000,000 people.
18. Spurgeon once said he counted 8 sets of thoughts that passed through his mind at the same time while he was preaching.
19. Testing the acoustics in the vast Agricultural Hall, Spurgeon shouted, “Behold the Lamb of God which taketh away the sin of the world.” A worker high in the rafters of the building heard this and became converted to Christ as a result.
20. Susannah Thompson, Spurgeon’s wife, became an invalid at age 33 and could seldom attend her husband’s services after that.
21. Spurgeon spent 20 years studying the Book of Psalms and writing his commentary on them, The Treasury of David.
22. Spurgeon insisted that his congregation’s new building, The Metropolitan Tabernacle, employ Greek architecture because the New Testament was written in Greek. This one decision has greatly influenced subsequent church architecture throughout the world.
23. The theme for Spurgeon’s Sunday morning sermon was usually not chosen until Saturday night.
24. For an average sermon, Spurgeon took no more than one page of notes into the pulpit, yet he spoke at a rate of 140 words per minute for 40 minutes.
25. The only time that Spurgeon wore clerical garb was when he visited Geneva and preached in Calvin’s pulpit.
26. By accepting some of his many invitations to speak, Spurgeon often preached 10 times in a week.
27. Spurgeon met often with Hudson Taylor, the well-known missionary to China, and with George Muller, the orphanage founder.
28. Spurgeon had two children—twin sons—and both became preachers. Thomas succeeded his father as pastor of the Tabernacle, and Charles, Jr., took charge of the orphanage his father had founded.
29. Spurgeon’s wife, Susannah, called him Tirshatha (a title used of the Judean governor under the Persian empire), meaning “Your Excellency.”
30. Spurgeon often worked 18 hours a day. Famous explorer and missionary David Livingstone once asked him, “How do you manage to do two men’s work in a single day?” Spurgeon replied, “You have forgotten that there are two of us.”
31. Spurgeon spoke out so strongly against slavery that American publishers of his sermons began deleting his remarks on the subject.
32. Occasionally Spurgeon asked members of his congregation not to attend the next Sunday’s service, so that newcomers might find a seat. During one 1879 service, the regular congregation left so that newcomers waiting outside might get in; the building immediately filled again.
C.H. Spurgeon