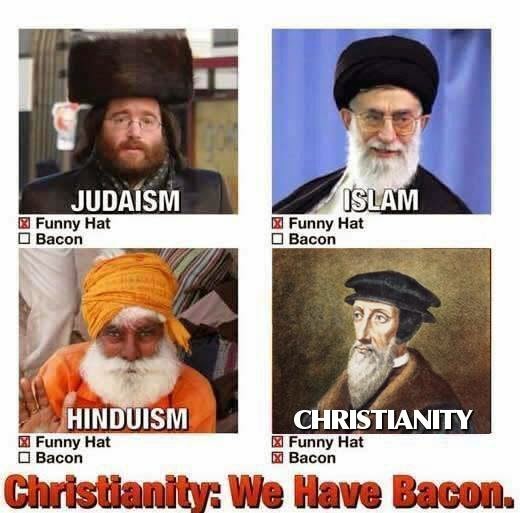 There are few today in the Christian world that are as witty as Doug Wilson. I recommend following his blog here. His most recent post "The 5 Smooth Stones of Theocratic Libertarianism," brought up some interesting thoughts concerning our founders intention of the Government and how it is being used today. John Adams said:

"It is religion and morality alone which can establish the principles upon which freedom can securely stand. The only foundation of a free constitution is pure virtue."

"We have no government armed with power capable of contending with human passions unbridled by morality and religion. . . . Our constitution was made only for a moral and religious people. It is wholly inadequate to the government of any other."

He has an interesting point. Also, what did John Adams mean when he said the word "religion?" Chew on that for a few minutes. George Washington said the following:

"While just government protects all in their religious rights, true religion affords to government its surest support."

"True Religion?" Whatever do you mean George!? You see, the reason people are having such a hard time with our government today is that they are ignorant and void of the foundational truths and the great faith that built this country. I would say that Protestants and Baptists are now in the minority in our country. However, at the time of our founding, most of the people here in the U.S. were Protestant and Baptist. It is true that there were a few Roman Catholics, and very few of the Jewish religion, but they were the minority then. So what would be the best way? I submit that you check out Wilson's post. I think that it is very informative.

Oh, and by the way. Here is the definition of religion back in the day of Washington and Adams.

"religion in its most comprehensive sense, includes a belief in the being and perfections of God, in the revelation of his will to man, in man's obligation to obey his commands, in a state of reward and punishment, and in man's accountableness to God; and also true godliness or piety of life, with the practice of all moral duties. It therefore comprehends theology, as a system of doctrines or principles, as well as practical piety; for the practice of moral duties without a belief in a divine lawgiver, and without reference to his will or commands, is not religion. religion as distinct from theology, is godliness or real piety in practice, consisting in the performance of all known duties to God and our fellow men, in obedience to divine command, or from love to God and his law. James 1:26. religion as distinct from virtue, or morality, consists in the performance of the duties we owe directly to God, from a principle of obedience to his will. Hence we often speak of religion and virtue, as different branches of one system, or the duties of the first and second tables of the law. Let us with caution indulge the supposition, that morality can be maintained without religion. Any system of faith and worship. In this sense, religion comprehends the belief and worship of pagans and Mohammedans, as well as of Christians; any religion consisting in the belief of a superior power or powers governing the world, and in the worship of such power or powers. Thus we speak of the religion of the Turks, of the Hindoos, of the Indians, etc. as well as of the christian religion We speak of false religion as well as of true religion."

Below is the link to the post I am referring to:

The 5 Smooth Stones of Theocratic Libertarianism