The Illusion of Hypocrisy - Lack of Discernment 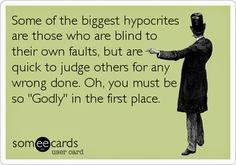 It seems that most like to sniff out a hypocrite. The national news media whether on TV, the internet or some other written form, has been a gossip column for many years and prides itself in destroying those whom it disagrees. What is sad about the whole thing is that they generally are successful. What is worse is that they are usually the bigger hypocrites because of the duplicity of their speech. They claim objectivity, but their reporting and commentary display something totally different. This tells me that people have lost their ability of discernment. These people are allowed to continue because the general population allows it. Somehow they take what is said on Fox News, CNN, CBS, NBC, ABC as the gospel. However, it is anything but gospel. On a smaller scale, we do this as well. That is why the news is so popular. People love gossip and love to hate the hypocrite (or perceived hypocrite). So what is a hypocrite? Webster defined it as the following:

Hypocrite - One who feigns to be what he is not; one who has the form of godliness without the power, or who assumes an appearance of piety and virtue, when he is destitute of true religion.

"A hypocrite is one who feigns (or acts) to be what he is not." This statement refers to the present. If a former hypocrite repents (turns) from his old ways and then begins a new path of restoration where he desires to share and encourage everyone to do the same, is he still a hypocrite? The obvious answer is "no." This kind of behavior should be applauded and encouraged. When someone in our country or community repents of a former way of life and decides to encourage others to do the same, someone automatically points the finger at them and says: "Look at what he used to do?" "What a scoundrel and a hypocrite!" Then everyone gets out their pitchforks, torches, and hanging rope to end the ministry of this man. What is strange is that nobody stops to say: "Wait a minute, this was a part  of this man's former way of life, he preaches against it now because he knows firsthand the damage it can do!" All Christians are made up of former hypocrites, it's just that some sins are more socially acceptable than others. If a Christian slides back into some form of hypocrisy, then he or she has an advocate to forgive (1 John 2:1). I mean, look at the Old and New Testament saints. King David, Paul the Apostle, Peter, and the list goes on. Most churches today wouldn't hire any of these guys into their pulpit because of their past. Nevertheless, God used them mightily. Remember what Jesus said in Matthew 7?

"Judge not, that you be not judged. For with the judgment you judge, you will be judged: and with what measure you use, it will be measured to you again."

If you are a journalist, a politician, or just an ordinary man or woman, remember two things. #1 - God has his eye on you, and #2 - you will be judged the same way that you judge others. Stop and think. Would you want to sit under your own judgment?

"One who has the form of godliness without the power, or who assumes an appearance of piety and virtue, when he is destitute of true religion." The true penitent man or woman is far from being destitute of true religion. In fact, he or she is the essence of it. This is true regardless of their past. Take king David for example. He generally was a good guy but was terribly fickle. He was a murdering, selfish, adulterer. Vileness crept out from within. Nevertheless, when confronted with his sin, he repented (turned) back to God's way and was restored. However, there were earthly consequences to his actions, and sometimes we have to realize that even though God forgives, man is not as forgiving, and there are always earthly consequences to our actions. Remember, Jesus taught that "You reap what you sow" (John 4:35-38). Paul taught that if you sow corruption, you will see the fruit of it, and if you sow goodness, you will see the fruit of it (Galatians 6:7). Does that justify false accusation? No. If you accuse a penitent man or woman of hypocrisy, even though they were wicked in their former days, beware. You may not like the end result. So who is destitute of true religion? Only the one who "currently" does not practice what they preach. If they have repented of their former ways, we should rejoice and encourage them to continue in righteousness.