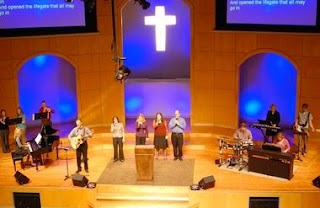 #1 - Membership Matters Class - I grew up Lutheran, so if you know anything about the Lutheran Church, you have to go through two years of "Confirmation" before you are allowed to partake of the Lord's Table (Lord's Supper). We were taught by the Pastors about the basic doctrines of the Lutheran Church, and much of this was based on 1 Corinthians 11:23-33:

"For I have received of the Lord that which also I delivered to you, that the Lord Jesus the same night in which he was betrayed took bread: And when he had given thanks, he broke it, and said, take, eat: this is my body, which is broken for you: this do in remembrance of me. After the same manner also he took the cup, when he had finished eating, saying, this cup is the new covenant in my blood: this do, as often as you drink it, in remembrance of me. For as often as you eat this bread and drink this cup, you do show the Lord's death till he comes. Wherefore whosoever shall eat this bread, and drink this cup of the Lord, unworthily, shall be guilty of the body and blood of the Lord. But let a man examine himself, and so that he may eat of that bread and drink of that cup. For he that eats and drinks unworthily, eats and drinks damnation to himself, not discerning the Lord's body. For this reason many are weak and sickly among you, and many sleep. For if we would judge ourselves, we should not be judged. But when we are judged, we are chastened by the Lord, that we should not be condemned with the world. Wherefore, my brethren, when you come together to eat, wait for one another. And if any man hunger, let him eat at home; that you do not come together in judgment. And the rest will be set in order when I come."


The idea was that one needs to know the Scriptures before he or she is able to take part in the Lord's Supper. For one to properly examine his or herself, they must be full of God's wisdom from Scripture. I think the two-year confirmation class was very helpful and necessary. How is one to know if they are in wrong standing with the Lord? We must be able to properly judge ourselves. In very much the same way, Wyatt has instituted the "Membership Matters Class." It is a class required before one can join the local church. I think it is a great idea! Personally, I would prefer it to cover a few more things in the span of a few more Sundays. But, for now, it is a three-hour course one Sunday to lay out for the seeker the doctrines and expectations of church membership at Wyatt. I think this is excellent and very discerning. The presence of the class itself will deter the "less serious" seeker and attract those who desire a fellowship of wise and discerning believers. It is a good caution because there are too many goats among the sheep in the American Churches. God wants those who are committed and serious about their commitment to him to be a part of the local church. They need to know what they are getting into. My wife and I were fortunate to take the three-hour class one Sunday and it was very helpful and instructive. I don't regret or despise having to take it at all. It also was a great opportunity to ask the Pastors and other members questions concerning the churches doctrines and anything else one can think of.

#2 - Expository Preaching - What is expository preaching? Expository means: "Serving to explain, tending to illustrate." Expository preaching is explaining and illustrating the Scriptures verse by verse. You see, too many preachers end up picking one verse and then orchestrating a political speech to form the Scriptures to their image. You see, Topical Preaching isn't all bad, but the dangers in topical preaching are too plentiful and dangerous. It is far better to exposit the Scriptures and let the inspired Word of God form the discussion. Not that addressing topics is all bad. In fact once in a while our pastors address topics concerning the assembly, but a steady diet of that will leave a congregation anemic. The Scriptures are God's inspired revelation of himself. To understand the Scriptures is to know better the mind of God. We are able to better understand God, his standing, his personality, his expectations, and so much more if we know the Scriptures. Paul said,

One does not truly come to faith unless he has heard the word of God and been quickened by the Holy Spirit. The Word and the Spirit are a necessary combination for salvation and spiritual growth. At Wyatt, our pastors understand this and are faithful expositors of God's Word.

#3 - Our Pastors Aren't Afraid To Tackle Difficult Texts - Have you ever heard a sermon on Genesis 38 concerning the story of Judah and Tamar? I never had until I attended Wyatt Baptist Church. I had sat in pews in the past where the hard and less-popular texts were either dodged or marked as insignificant. Not at Wyatt. I appreciate our Pastor's bravery in their willingness to preach the hard texts. I have been in congregations where pastors would avoid these texts for political expedience. They feared the mob. Not at Wyatt! Our pastors are fearless of man and fear God with passion!

Yes I can say that we are blessed beyond what we deserve. Wyatt is a great church. I hope that if you are in the El Dorado, Arkansas area on any given Sunday, come in and visit Wyatt Baptist. If you live in Magnolia and are desiring to hear some expository preaching and want to know about those "difficult texts" in the Bible. It is worth the drive!