Justin Martyr’s First Apology – The Faith and Life of Christians 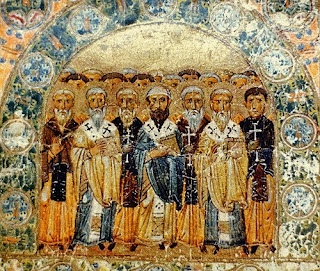 9. Certainly we do not honor with many sacrifices and floral garlands the objects that men have fashioned, set up in temples, and called gods. We know that they are lifeless and dead and do not represent the form of God—for we do not think of God as having the kind of form which some claim that they imitate to be honored—but rather exhibit the names and shapes of the evil demons who have manifested themselves [to men]. You know well enough without our mentioning it how the craftsmen prepare their material, scraping and cutting and molding and beating. And often they make what they call gods out of vessels used for vile purposes, changing and transforming by art merely their appearance. We consider it not only irrational but an insult to God, whose glory and form are ineffable, to give his name to corruptible things which themselves need care. You are well aware that craftsmen in these [things] are impure and—not to go into details—given to all kinds of vice; they even corrupt their own slave girls who work along with them. What an absurdity, that dissolute men should be spoken of as fashioning or remaking gods for public veneration, and that you should appoint such people as guardians of the temples where they are set up—not considering that it is unlawful to think or speak of men as guardians of gods.

10. But we have learned [from our tradition] that God has no need of material offerings from men, considering that he is the provider of all. We have been taught and firmly believe that he accepts only those who imitate the good things which are his—temperance and righteousness and love of mankind, and whatever else truly belongs to the God who is called by no given name. We have also been taught that in the beginning he in his goodness formed all things that are for the sake of men out of unformed matter, and if they show themselves by their actions worthy of his plan, we have learned that they will be counted worthy of dwelling with him, reigning together and made free from corruption and suffering. For as he made us in the beginning when we were not, so we hold that those who choose what is pleasing to him will, because of that choice, be counted worthy of incorruption and of fellowship [with him]. We did not bring ourselves into being—but as to following after the things that are dear to God, choosing, them by the rational powers which he has given us—this is a matter of conviction and leads us to faith. We hold it to be for the good of all men that they are not prevented from learning these things, but are even urged to [consider] them. For what human laws could not do, that the Word, being divine, would have brought about, if the evil demons had not scattered abroad many false and godless accusations, with the help of the evil desire that is in every man by nature [and expresses itself] in all kinds of ways. None of this, however, matters to us.
11. When you hear that we look for a kingdom, you rashly suppose that we mean something merely human. But we speak of a Kingdom with God, as is clear from our confessing Christ when you bring us to trial, though we know that death is the penalty for this confession. For if we looked for a human kingdom we would deny it in order to save our lives, and would try to remain in hiding in order to obtain the thing we look for. But since we do not place our hopes on the present [order], we are not troubled by being put to death, since we will have to die somehow in any case.
12. We are in fact of all men your best helpers and allies in securing good order, convinced as we are that no wicked man, no covetous man or conspirator, or virtuous man either, can be hidden from God, and that everyone goes to eternal punishment or salvation in accordance with the character of his actions. If all men knew this, nobody would choose vice even for a little time, knowing that he was on his way to eternal punishment by fire; every man would follow the self-restrained and orderly path of virtue, so as to receive the good things that come from God and avoid his punishments. There are some who merely try to conceal their wrongdoing because of the laws and punishments which you decree, knowing that since you are only men it is possible for wrongdoers to escape you; if they learned and were convinced that our thoughts as well as our actions cannot be hidden from God they would certainly lead orderly lives, if only because of the consequences; as you must agree. But it seems as if you were afraid of having all men well-behaved, and nobody left for you to punish; this would be the conduct of public executioners, not of good rulers. Such things, we are convinced, are brought about by the evil demons, the ones who demand sacrifices and service from men who live irrationally; but we have not learned [to expect] any unreasonable conduct from you, who aim at piety and philosophy. But if like thoughtless men you prefer custom to truth, then go ahead and do what you can. Rulers who respect reputation rather than truth have as much power as brigands in a desert. The Word himself has shown that you will not succeed, and after God who begat him we know of no ruler more royal or more just than he. For just as all men try to avoid inheriting the poverty or sufferings or disgrace of their ancestors, so the sensible man will not choose whatever the Word forbids to be chosen. He foretold that all these things would happen—our Teacher, I mean, who is the Son and Apostle of God the Father and Master of all, that is, Jesus Christ, from whom we have received the name of Christians. We are sure that all the things taught by him are so, since we see that what he predicted is actually coming to pass. This is God’s work, to announce something before it happens and then to show it happening as predicted. I might stop here and add no more, having made clear that we ask for what is just and true. But though I know that it is not easy to change over at once a mind which is bound down by ignorance, I am encouraged to add somewhat to persuade the lover of truth, being sure that one can dispel ignorance by putting truth against it.