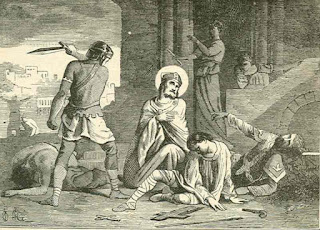 ....having become disobedient, [Eve] was made the cause of death for herself and for the whole human race; so also Mary, betrothed to a man but nevertheless still a virgin, being obedient, was made the cause of salvation for herself and for the whole human race....Thus, the knot of Eve's disobedience was loosed by the obedience of Mary. What the virgin Eve had bound in unbelief, the Virgin Mary loosed through faith. ...But this man [of whom I have been speaking] is Adam, if truth be told, the first-formed man....We, however, are all from him; and as we are from him, we have inherited his title. ...Indeed, through the first Adam, we offended God by not observing His command. Through the second Adam, however, we are reconciled, and are made obedient even unto death. For we were debtors to none other except to Him, whose commandment we transgressed at the beginning. (Against Heresies 3:22:4; 3:23:2; 5:16:3)

The teaching of Original sin is laid out fairly well in Scripture and of course in nature itself. There are many who try and pin the formulation of this doctrine on Augustine of Hippo (Circa 354-430 A.D.) as an innovation. However, Irenaeus of Lyons (Circa 130-202 A.D.) was one of the first ones to describe this line of thought in his work “Against Heresies.” He was a disciple of Polycarp, who had been taught by John the Apostle. Irenaeus's work was mainly focused on refuting the cult of Gnosticism, which had grown even after the time of John the Apostle. Irenaeus compared Gnosticism’s view with the Apostolic Tradition on the subject. He believed that we all have offended God because we were “in” Adam. He also knew that death and guilt were a result of the fall and all humanity was affected by it. Adam’s sin is the poisonous spring that is the source of all human sinfulness. Mortality and pain also came as a result of this decision. Irenaeus believed that we all are enslaved to sin until we are rescued by the “Son of God.” It is only through the Atonement and Resurrection that any man can be justified by God.

You can begin reading the work itself here.