Cyprian of Carthage and The Comma Johanneum 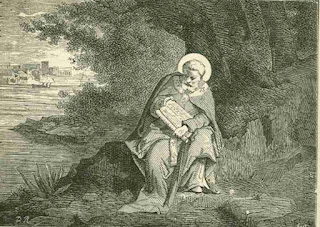 6. The spouse of Christ cannot be adulterous; she is uncorrupted and pure. She knows one home; she guards with chaste modesty the sanctity of one couch. She keeps us for God. She appoints the sons whom she has born for the kingdom. Whoever is separated from the Church and is joined to an adulteress, is separated from the promises of the Church; nor can he who forsakes the Church of Christ attain to the rewards of Christ. He is a stranger; he is profane; he is an enemy. He can no longer have God for his Father, who has not the Church for his mother. If any one could escape who was outside the ark of Noah, then he also may escape who shall be outside of the Church. The Lord warns, saying, “He who is not with me is against me, and he who gathereth not with me scattereth.” Matt. xii. 30. He who breaks the peace and the concord of Christ, does so in opposition to Christ; he who gathereth elsewhere than in the Church, scatters the Church of Christ. The Lord says, “I and the Father are one;” John x. 30. and again it is written of the Father, and of the Son, and of the Holy Spirit, “And these three are one.”1 John v. 7. And does any one believe that this unity which thus comes from the divine strength and coheres in celestial sacraments, can be divided in the Church, and can be separated by the parting asunder of opposing wills? He who does not hold this unity does not hold God’s law, does not hold the faith of the Father and the Son, does not hold life and salvation.
7. This sacrament of unity, this bond of a concord inseparably cohering, is set forth where in the Gospel the coat of the Lord Jesus Christ is not at all divided nor cut, but is received as an entire garment, and is possessed as an uninjured and undivided robe by those who cast lots concerning Christ’s garment, who should rather put on Christ.The above reading of this passage seems hopelessly obscure; and it is not much mended apparently by substituting “ipsam” for Christum, unless “potius” be omitted, as in some editions, in which case we should read, “who should put it on.” Holy Scripture speaks, saying, “But of the coat, because it was not sewed, but woven from the top throughout, they said one to another, Let us not rend it, but cast lots whose it shall be.”John xix. 23, 24. That coat bore with it an unity that came down from the top, that is, that came from heaven and the Father, which was not to be at all rent by the receiver and the possessor, but without separation we obtain a whole and substantial entireness. He cannot possess the garment of Christ who parts and divides the Church of Christ. On the other hand, again, when at Solomon’s death his kingdom and people were divided, Abijah the prophet, meeting Jeroboam the king in the field, divided his garment into twelve sections, saying, “Take thee ten pieces; for thus saith the Lord, Behold, I will rend the kingdom out of the hand of Solomon, and I will give ten sceptres unto thee; and two sceptres shall be unto him for my servant David’s sake, and for Jerusalem, the city which I have chosen to place my name there."1 Kings xi. 31. As the twelve tribes of Israel were divided, the prophet Abijah rent his garment. But because Christ’s people cannot be rent, His robe, woven and united throughout, is not divided by those who possess it; undivided, united, connected, it shows the coherent concord of our people who put on Christ. By the sacrament and sign of His garment, He has declared the unity of the Church."  The Treatises of Cyprian.Treatise I. On the Unity of the Church

Cyprian was the Bishop of Carthage in North Africa, and lived from Circa 210 to 258 A.D. Carthage is located in present day Tunisia. Cyprian was an important early church writer whose Latin works have survived. Cyprian was Classically Educated, and not long after becoming a Christian, he was appointed bishop in 249 A.D. His conduct and methods were disputed by some during his time. He stood strong against the Novatianist Heresy, which was the predominant cult of his day. He was martyred in Carthage, which strengthened his favorability among those who criticized him during his life. He was looked to as the foremost Latin Father in the Church until the arrival of Augustine and Jerome. There is a lot of Controversy surrounding his quotation of the Comma Johanneum (1 John 5:7), which in our day doesn’t provide much manuscript evidence in the Greek. However, what most folks don’t mention is that the manuscript evidence for 1 John in Greek is altogether small.