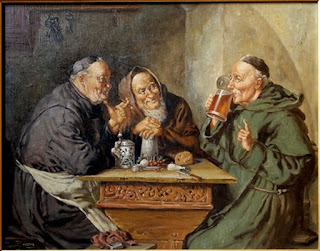 Now the Spirit speaks expressly, that in the latter times some will depart from the faith, giving heed to seducing spirits, and doctrines of devils; speaking lies in hypocrisy; having their conscience seared with a hot iron; forbidding to marry, and commanding to abstain from meats, which God has created to be received with thanksgiving of them which believe and know the truth. For every creature of God is good, and nothing to be refused, if it be received with thanksgiving: for it is sanctified by the word of God and prayer. 1 Timothy 4:4-5

Now the text above is talking about meat that was sacrificed to idols, but you could add:

Go your way, eat your bread with joy, and drink your wine with a merry heart; for God now accepts your works. Ecclesiastes 9:7

Effervesce - To be in natural commotion, like liquor when gently boiling; to bubble and hiss, as fermenting liquors, or any fluid, when some part escapes in an elastic form; to work, as new wine.

"Go your way, eat your bread with joy, and drink your beer with a merry heart; for God now accepts your works."

Beer and wine is a gift, and should be used wisely. Some try to unnecessarily place legalistic restrictions upon us by adding to God's commands of self-control. Issues of conscience should always be upheld by those that hold them, but an issue of conscience that doesn't violate God's commands should not be laid upon others as a new law. Abstaining if it is a voluntary act, is a wonderful thing. However, if it is added as a mandatory commandment for church membership or fellowship, they who impose such restrictions are found in rebellion against God, His standards of self-control, and Christian liberty. If beer and wine is a gift from God, we should honor Him with it just like we should honor Him with all of the gifts He bestows upon us.
Christian Liberty Food & Drink