The Humble Do Not Commit Acts of Idolatry and Sorcery 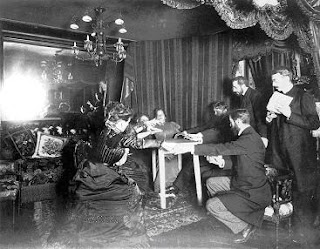 "Be of the same mind one toward another. Don’t set your mind on high things, but associate with the humble. Don’t be wise in your own conceits." Romans 12:16 WEB


"16 But I say, walk by the Spirit, and you won’t fulfill the lust of the flesh. 17 For the flesh lusts against the Spirit, and the Spirit against the flesh; and these are contrary to one another, that you may not do the things that you desire. 18 But if you are led by the Spirit, you are not under the law. 19 Now the deeds of the flesh are obvious, which are: adultery, sexual immorality, uncleanness, lustfulness,20 idolatry, sorcery, hatred, strife, jealousies, outbursts of anger, rivalries, divisions, heresies, 21 envy, murders, drunkenness, orgies, and things like these; of which I forewarn you, even as I also forewarned you, that those who practice such things will not inherit God’s Kingdom.22 But the fruit of the Spirit is love, joy, peace, patience, kindness, goodness, faith, 23 gentleness, and self-control. Against such things there is no law. 24 Those who belong to Christ have crucified the flesh with its passions and lusts.25 If we live by the Spirit, let’s also walk by the Spirit. 26 Let’s not become conceited, provoking one another, and envying one another." Galatians 5:16-26 WEB


These two are points that certainly involve some time and research. As we know, idolatry has always been an issue with mankind since the fall. Sorcery may seem a little foreign to us in the United States, but when we dig into the word, maybe I can make more sense of it. Focusing on these two will challenge your faith, and possibly shed some light on that inner man who is full of blemishes.


The Humble are Not Idolaters

There has been a lot of material written over the years concerning this subject. I suppose it is because in our Western culture, our idols are different than the ones of wood and metal back when this was originally written. So what is idolatry? Have I committed it? Let's look a little closer.

Idolatry: εἰδωλολατρία:the worship of false gods, idolatry/ of the formal sacrificial feats held in honor of false gods/ of avarice, as a worship of Mammon/ in the plural, the vices springing from idolatry and peculiar to it.


Idolatry has taken on many different faces throughout the generations. Probably one of the most helpful elements of understanding this is to understand the meaning of worship itself.

Worship: noun - Chiefly and eminently, the act of paying divine honors to the Supreme Being; or the reverence and homage paid to him in religious exercises, consisting in adoration, confession, prayer, thanksgiving and the like. verb - To adore; to pay divine honors to; to reverence with supreme respect and veneration.


The best way I can describe it is that we tend to worship what is most important to us. Even people who say they don't believe in a god at all display the qualities of worship everyday. We worship what we love and adore. It could be a person or a thing, but in the end, that is essentially the gist of it. So when does it become idolatry? Basically when it is outside of the bounds God has prescribed for us. Thankfully God is open and allows a lot of freedom when it comes to our worship of "Him." It isn't idolatry to love and enjoy the gifts of God for example. However, when that love turns into "worship," then it is a form of idolatry. One example I can think of is drinking alcoholic beverages. I like a good ale or lager with my dinner and when I am winding down in the evening sometimes. However, if that one or two turned into five or six beers, then I would be falling out of the bounds God has prescribed for me (I'd also be sick!). People become drunkards for various reasons, but drunkenness is a result of someone forgetting God, not holding Him in high honor. Prohibitionists would be the other extreme. In their efforts to honor God, they would dethrone Him and take over by telling Him they know better (Colossians 2:16-23). It's not wrong to abstain from alcohol personally. In fact it is commendable. However, if you are set on foisting your personal preferences onto someone and putting it on the same level as Scripture, then you are not worshiping God and His standard, but your own. Greed and gluttony are two other sins that fall into a similar scale. It's not wrong to have things that you need, but when you waste money on things that have no real purpose or value for the Kingdom, and are outside the bounds God prescribes, you are being greedy. Food is a necessity and given by God as a means of nourishment. However, we should only eat necessary portions, not stuffing ourselves beyond reason. Anything can become an idol if we hold it in higher importance than God and His ways. God has laws for us to follow and there is freedom within those boundaries. We all are prone to wander outside of those limits when we either add-to or take-away from God's standard. Worshiping God is first an act of grace, then it produces faith, which is displayed through obedience. When we dethrone God and replace Him with something else, whether it be our excess or self-righteousness, then that is when we commit idolatry. God is so important to the humble man and woman that they are willing to "give up everything" for Him and His Kingdom (even a good ale if being done voluntary as an act of love!). That is right worship. But, when one becomes infatuated with someone or something like Gollum was in the Hobbit and the Lord of the Rings, then they certainly have crossed over into the realm of idolatrous worship. Grace and peace do not reside there.

Humble and Lowly Folk Do Not Involve Themselves in Sorcery

When I was in high school, I dated a girl who messed around with Ouija boards and things like that. I thought it was hoaky until I saw her use it once. I can safely say that it creeped me out. I have experienced things that I cannot explain, and sometimes the supernatural realm gives you a glimpse of its presence. I have seen good and evil things that I still to this day cannot scientifically explain other than to say it was a work of God (when it was good) or a work of the devil (evil things). That being said, this idea of sorcery or witchcraft seems like some fairytale element out of a Harry Potter book. So what was Paul talking about?

Sorcery: φαρμακεία:the use or the administering of drugs/ poisoning /sorcery, magical arts, often found in connection with idolatry and fostered by it. / metaph. the deceptions and seductions of idolatry.


Sorcery seems to be connected to drug abuse and idolatry. Some of my Prohibitionist friends would jump on this and say: "See, it says administering of drugs!" However, to take on such a rigid interpretation would also mean the prohibition of the medical use of drugs (1 Timothy 5:23). What is inferred to here is the use that Shamans or Witches make of drugs in their efforts to "get closer" to the worldly spirits. In many pagan cultures, drugs are frequently used and abused to obtain a closer connection to the great spirits that surround us. The more drugs, the better experience some say. Seances sometimes are performed by mediums to make a connection with the dead. We know that these spirits aren't the souls of our loved ones, but rather those of demons and powers in high places (Ephesians 6:12). The big problem with Sorcery, Witchcraft, or Divination is that its source is demonic and it is an effort to circumvent God to find guidance and enlightenment. The Bible sometimes identifies fraudulent sorcerers, but this is rare. Most of the sorcerers in the Bible were authentic and had a connection to the demonic realm. Astrology and fortune-telling are also part of this spectrum. The application that is probably the most important for us is the fact that this is a form of idolatry. Even if the sorcerer or sorcery that one is attempting to be involved in is fraudulent, it is still an affront to God because the person is seeking wisdom apart from Him. This is idolatry and is the most important issue facing sorcery. That being said, everything else involved in this is damaging to the soul and sometimes even to the body. One thing is for sure, the humble men and women of the earth will not be found participating in this.
Humility Idolatry Sorcery Witchcraft