Don't Throw The Baby Out With The Bath Water 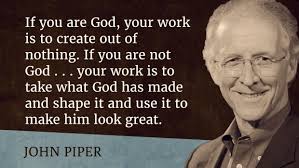 Do you disagree with anyone over anything? If you are honest, I'm sure the question doesn't deserve an answer. However, the reason I am asking such a question is to put a few things into perspective. People get confused with me concerning some of the things I support and advertise personally and on social media. One day I'll post something from Max Lucado, then the next day John Piper. I'll post things that sometimes come from a Politically Liberal Publication, and then the next day I am posting something from a Conservative or Libertarian source. Some say: "This guy doesn't know what he believes!" That would be true if I claimed to support entirely the doctrines and views of those I posted things from. One might say: "Where's your loyalty?" My loyalty is to God, the truth, and nothing else. The truth is that we all have things that we think that aren't 100% in step with those we support. Take John Piper for example. I agree with him most of the time, but I don't always agree with him. Max Lucado is the same way. However, that doesn't mean that I am going to "throw out the baby with the bath water!" I heard a fella say once: "Eat the meat and spit out the bones." That is pretty much my philosophy when quoting folks, sharing articles, and even supporting ministries like Desiring God.

When It Gets Messy

Max Lucado earlier this year expressed his disdain for Donald Trump and his manner of living. As a slamming Lucado and his decision. People were calling him a Pharisee and all kinds of ugly things. As a result, some have decided to close their ears to him and repudiate anyone who supports him. John Piper had a similar thing happen when he posted an article responding to Jerry Fallwell Jr. late last year concerning a view he has on guns. Folks ripped into Piper offering no mercy. Even folks who agreed with Piper Theologically more than I do were offering no clemency. Piper recently got into the political sphere stating his opinion of the two front runners. Many would disagree with him, but should we throw out his advice because of our petty disagreements on Politics? Beware of the news media anyway, they make these things more important than they are in reality. They also love to cause division and discord so they will have something to report, gossip, and write about. We need to decide whether we are children first of the Kingdom of God, or the kingdoms of the world. We truly have no lasting city here anyway (Hebrews 13:14-16).

result, he decided not to vote for the man and made it known publicly. I have seen a few articles floating around on the web

I had a boss once who would always say: "What are you willing to accept?" I think of him and that line often. I have also found that the more humble a person becomes, the less awesome he thinks his opinions are, and tends to be a very tolerant person. When I say tolerant, I don't mean in the sense that Progressives want us to be. I mean that within reason and inside the "Body of Christ." Since the "Fall," the Devil has sought to do everything possible to divide the "Children of God." He wants to keep us so busy "in-fighting" that we aren't privy to what is going on. There are core doctrines that "every" Christian should know and hold to, but they probably aren't what you think. Why are there so many disagreements between believers in Christ? Well, that is because the Bible is clear on some things and not so clear on others. I personally have found it helpful just to speak like the Bible speaks, and then I am on safe ground. However, that in and of itself is enough to get any man or woman in trouble.

“Blessed are the merciful, for they shall receive mercy." Matthew 5:7 ESV

Mercy should be applied in most circumstances since we all are deficient in one way or another. My parents are both Lutheran and I am a Reformed Baptist. There is no doubt that we mostly agree, but on things like Baptism we part ways. My Mom and I have had many conversations about that, and we now just agree to disagree. Should we be divided and despise each other because of it? Certainly not! I have learned a great deal from my Mom and Dad, and am blessed when they impart wisdom to me, even wisdom they gained through the Lutheran Church. How many Baptist Theologians quote Calvin and Luther? Hundreds! Why? Because they had a lot of awesome things to say! Certainly I don't always agree with Calvin or Luther. But, that doesn't mean that I should cease to read them and be blessed by their wisdom. The Early Church Fathers are the same way. They disagreed with each other on many things, but they held to unity. We must seek to do the same. Should we oust Piper because of his views on guns? or Lucado because he struggles voting for Trump? Certainly not! They are our brethren. Joint heirs in the Kingdom. A Kingdom which rises high above the Kingdoms of the world. Whether you like it or not, Piper and Lucado are God's messengers. Yes even they have disagreements, but there is unity in the Truth. The Moravians would say:

"In Essentials Unity, In Non-Essentials Liberty, In All Things Charity"

This should be the motto of all Christians, especially when it concerns things such as worldly governments and self-defense. I encourage you to stick with Lucado and Piper. They are good men who love Jesus. Even if you strongly disagree with their politics, don't be deceived by the petty fears of worldly men. "Don't throw the baby out with the bathwater!"
Charity Community Doctrine John Piper Max Lucado Politics Self-Defense Unity