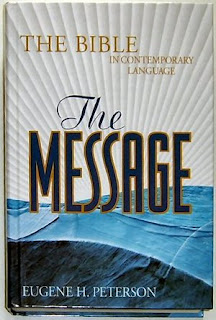 While it's not the most grand and revered piece of scholarship, the Message translation is a helpful addition to any persons library. It's called the Message to imply that it's purpose isn't meant to be a stellar unit of scholarship under the hermeneutical auspice of an academic board. I am all for accuracy and can understand why some struggle with paraphrases. However, remember that a paraphrase is "designed" to capture the "message" more than the literal word-for-word translation of the Biblical texts. It is a good piece of literature to read for anyone. Eugene Peterson who is the author said it this way:

"When Paul of Tarsus wrote a letter, the people who received it understood it instantly, When the prophet Isaiah preached a sermon, I can't imagine that people went to the library to figure it out. That was the basic premise under which I worked. I began with the New Testament in the Greek --- a rough and jagged language, not so grammatically clean. I just typed out a page the way I thought it would have sounded to the Galatians"

The average reading level of the United States, which is a predominantly English speaking country, is at a 7th to 8th grade level.

Here is a list of translations and their reading levels according to christianbook.com :

is As you can see, the Message is below the average. You would be surprised how many folks read on a 4th to 5th grade level. One reason there are so many translations is that every publishing company wants to have their own. That being said, they also have a lot for this reason listed above. I actually prefer the KJV and NKJV due to the fact that I prefer the Biblical texts from which they are derived. However, I like reading the others. I think the spirit of Peterson's intent is accurate according to what I know about history. Most of the ancient world was illiterate to begin with. Much of the time the stories we read about in the Bible were passed on orally within the community as they were seeking to spread the "Good News." Yes there was preservation in writing. The churches preserved the writings they received. That is partly one reason why we have some variations between manuscripts. There are some others that I won't cover here at the moment. Accuracy is important, but can anyone say that the "message" of the Gospel is hindered between all of the translations listed above? My great-grandmother was raised in a poor North Louisiana home in the early 1900's where the education they received wasn't stellar. She did learn to read, but not very well. She was raised in a time when people in our country were more concerned with survival than novelty. She then married an Oil Field Worker (My great-Grandfather) who eventually lost one of his arms on a drilling rig. I have her "Good News" translation that she read often in her latter years thanks to Billy Graham. In her day the King James Version was really the only Bible anyone could obtain easily and I think it is a wonderful translation of the texts from which it is derived. But, when my great-grandmother received her "Good News" bible, she felt blessed because it was more readable for her. Now she died in 1992 at the age of 92, and in her sunset years she was able to sit down, read, and better understand the message of the Gospels she had such faith in most of her life. Therefore, I would be careful not to criticize too much.

I would say that Peterson has a ministers heart. His goal is to make the Scriptures "more accessible" to those who don't read as well as others. I was once a snob when it came to this kind of thing and was worried and concerned about the degradation of the text and integrity of the message (No pun intended!). I understand the concern, and I agree that we must be careful. However, I haven't found a high level of degradation of the Biblical Message in these Paraphrases. In fact, I haven't really found any at all. The truth is there is always a little bit of something lost when we translate from one language to the other, but not always. It may take two words in English to translate the meaning of one word in Greek, and if that is what it takes, so be it. I don't read as well as some of my brethren. Many of them are extremely intelligent and able to mince words in ways I have never thought of. That being said, don't forget us down here at the lower level. Don't forget those of us who don't read as well as others. I recommend the Message translation. It is a good Paraphrase that contains the essence and original message of the Holy Writ. It isn't an attempt to degrade the message of the Bible, but to make it more accessible to those who may not read as well as you do. I hope you will encourage this translation, and if you are that concerned with Biblical accuracy concerning translations, then maybe you should start a class on English grammar at your church. You know churches once did all the things that the Government does now. They Educated and cared for the poor, and what I have read from history, they did it better too!