Irenaeus on The Importance of Mystery 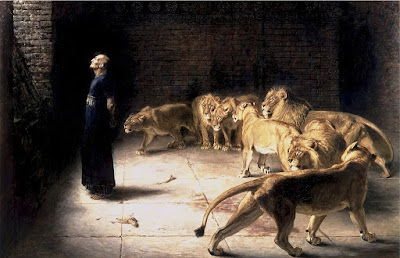 A healthy mind, one which does not expose its possessor to danger and is devoted to piety and the love of truth, eagerly meditates on those things which God has placed within the power of humankind and has subjected to our knowledge. It will advance in them, learning them easily by daily study. (2: 27,1) The entire Scriptures, the Prophets, and the Gospels can be clearly, unambiguously, and harmoniously understood by all, even if all do not believe them. (2: 27,2) Having the truth itself as our rule and the testimony concerning God set clearly before us, we should not cast away the firm and true knowledge of God by scurrying after a multitude of contradictory responses to questions. It is much more appropriate that we guide our inquiries to investigate the mystery and administration of the living God, and so increase in love for Him who has done and still does such great things for us. (2: 28,1)
If, therefore, even with respect to creation, there are some things only God knows, while others come within the range of our knowledge, why should we complain if, in regard to those things which we investigate in the Scriptures (which are thoroughly spiritual), we are able by the grace of God to explain only some of them, while we must leave the rest in the hands of God— and that not only in the present world but also in that which is to come— so that God will forever teach and human beings will forever learn the things God teaches? . . . If, then, . . . we leave some questions in the hands of God, we will keep our faith from injury and will continue without danger. Moreover, we will find all Scripture, which has been given to us by God, to be entirely consistent. Then the parables will harmonize with the passages which are perfectly plain, and the statements which are clear in meaning will help explain the parables, and in all the various utterances of Scripture we will hear one harmonious melody, praising in hymns the God who created all things. So, for instance, if anyone asks, “What was God doing before He made the world?” we reply that the answer to such a question lies hidden with God Himself. (2: 28,3) If anyone asks, “How was the Son produced by the Father?” we reply that no one understands that production, or generation, or calling, or revelation, or whatever term may be used to describe His generation: it is utterly indescribable. (2: 28,6) We have learned from the Scriptures that God holds the supremacy over all things. But Scripture has not revealed to us the way He produced it. . . . In the same way, we must leave unanswered the question why, since all things were made by God, some of His creatures sinned and revolted from a state of submission to God. . . . Since we know only in part [1 Cor 13: 12], we must leave all sorts of questions in the hands of Him who gives us grace by measure. (2: 28,7) God alone, who is Lord of all, is without beginning and without end, being truly and forever the same, and always remaining the same unchangeable being. But all things that proceed from Him, everything that has been made and is made, has its own beginning. Consequently, they are inferior to Him who formed them, since they are not unbegotten. (2: 34,2) Life does not arise from us, or from our own nature; it is granted by the grace of God. Therefore the one who takes care of the life received and gives thanks to Him who imparted it will also receive everlasting life. But the one who rejects it and shows himself ungrateful toward his maker, since he has been created and has not recognized Him who bestowed life, deprives himself of ongoing existence. (2: 34,3) Irenaeus 130-202 A.D. Against Heresies
Payton Jr., James R.. A Patristic Treasury, Early Church Wisdom for Today (Kindle Locations 1359-1374). Ancient Faith Publishing. Kindle Edition.