The Thief on The Cross: Sight to the Blind and Humility 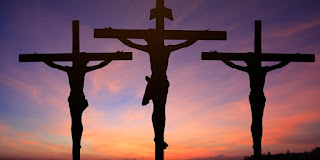 32 Two different men, who were criminals, also were led with Him to be killed. 33 When they came to the place which is called The Skull, there they crucified Him and the criminals, one on the right and one on the left. 34 Jesus said, “Father, forgive them, for they know not what they do.” And they divided His clothes by casting lots.
35 The people stood by watching. But the rulers with them scoffed, saying, “He saved others. Let Him save Himself if He is the Christ, the Chosen One of God.”
36 And the soldiers also mocked Him, coming to Him and offering Him sour wine, 37 saying, “If You are the King of the Jews, save Yourself.”
38 An inscription was written over Him in letters of Greek and Latin and Hebrew:
THIS IS THE KING OF THE JEWS.
39 One of the criminals who were hanged blasphemed Him, saying, “If You are the Christ, save Yourself and us!”
40 But the other rebuked him, saying, “Do you not fear God, seeing you are under the same sentence? 41 And we indeed, justly. For we are receiving the due reward of our deeds. But this Man has done nothing amiss.”
42 Then he said to Jesus, “Lord, remember me when You come into Your kingdom.”
43 Jesus said to him, “Truly, I tell you, today you will be with Me in Paradise.” Luke 23:32-43 MEV

The story of the thief on the cross is a wonderful record that actually happened. To get the full account, let's look at Tatian's Diatessaron, which was compiled sometime during his time on this earth between 150 & 160 A.D. and is a compilation of all four Gospel accounts into one volume.

"30, This the soldiers did. And they sat and guarded him there. And Pilate wrote on a tablet the cause of his death, and put it on the wood of the cross above his head. And there was written upon it thus: THIS IS JESUS THE NAZARENE THE NAZARENE, THE KING OF THE Jews. And this tablet read many of the Jews: for the place where Jesus was crucified was near the city: and it was written in Hebrew and Greek and Latin. And the chief priests said unto Pilate, Write not, The King of the Jews; but, He it is that said, I am the King of the Jews. Pilate said unto them, What hath been written hath been written. And the people were standing beholding; and they that passed by were reviling him, and shaking their heads, and saying, Thou that destroyest the temple, and buildest it in three days, save thyself if thou art the Son of God, and come down from the cross. And in like manner the chief priests and the Arabic, scribes and the elders and the Pharisees derided him, and laughed one with 38, another, and said, The saviour of others cannot save himself. If he is the Messiah, the chosen of God, and the King of Israel, let him come down now from the cross, that we may see, and believe in him. He that relieth on God--let him deliver him now, if he is pleased with him: for he said, I am the Son of God. And the soldiers also scoffed at him in that they came near unto him, and brought him vinegar, and said unto him, If thou art the King of the Jews, save thyself. And likewise the two robbers also that were crucified with him reproached him. And one of those two malefactors who were crucified with him reviled him, and said, If thou art the Messiah, save thyself, and save us also. But his comrade rebuked him, and said, Dost thou not even fear God, being thyself also in this condemnation? And we with justice, and as we deserved, and according to our deed, have we been rewarded: but this man hath not done anything unlawful. And he said unto Jesus, Remember me, my Lord, when thou comest in thy kingdom. Jesus said unto him, Verily I say unto thee, To-day shalt thou be with me in Paradise. And there stood by the cross of Jesus his mother, and his mother's sister, Mary that was related to Clopas, and Mary Magdalene. And Jesus saw his mother, and that disciple whom he loved standing by; and he said to his mother, 51 Woman, behold, thy son! And he said to that disciple, Behold, thy mother! And from that hour that disciple took her unto himself."

The first thing I would like to notice is that both thieves reproached Him. "likewise the two robbers also that were crucified with him reproached him." When hung on the cross, we can see that both of the thieves were hard, unrepentant sinners. They "reproached" Him, which means they tried to shame or disgrace Him as the others around who were watching Him hang on the cross.

Then, something happened. "One of the criminals who were hanged blasphemed Him, saying, “If You are the Christ, save Yourself and us!”But the other rebuked him, saying, “Do you not fear God, seeing you are under the same sentence? And we indeed, justly. For we are receiving the due reward of our deeds. But this Man has done nothing amiss.” (Luke 23:39-40 MEV). Now, we don't know any detail about how, why, or when exactly, but we can observe here that there was a change in the repentant thief for him to become so humble and contrite. Many people debate and argue about the power of God and how He works to save individuals. Everyone has developed sophisticated systems based on Scripture to try to explain the mysterious realm of God's sovereignty and man's responsibility when it comes to repentance and faith in Jesus Christ. However, I'm not here to promote a specific system developed by Theologians. I just want to point out that there are things at play in the unseen realm that opened the eyes and ears of this man. He was a thief and a reviler. He was blind (Isaiah 6:10/Jeremiah 5:21/Ezekiel 12:2/Matthew 13:15/Acts 28:27/Romans 11:8); Then, by the grace of God, he saw and believed that Jesus was who He said he was (Matthew 13:16). He put his faith in the anointed King who was hanging there on the cross. It goes beyond human logic for such a thing to happen, unless the mighty power of God turned him so that he could truly see. Then, the condemned thief acted on that belief by confessing his sinfulness, and then rightfully asking Jesus for mercy. Since Jesus is so gracious, He granted the man his request and promised to take him to Paradise where He was going to rescue the souls of men who had believed in Old Testament times in what we call Abraham's Bosom (Luke 16:19-31/Luke 23:43/for more on this read: http://www.desiringgod.org/articles/he-descended-into-hell?#_=_). Once Jesus arose, the repentant thief was released with all of the other Old Testament saints to go and be in heaven in the presence of God. This was possible since the sacrifice for all sins had been made (Hebrews 7:27/ 10:1-18).

The turning and vision of this "thief" is quite remarkable. It is similar to the story of Matthew when Jesus called him to "follow." The text goes like this:

"As Jesus passed on from there, He saw a man named Matthew sitting at the tax collector’s station. And He said to him, “Follow Me.” And he rose and followed Him." Matthew 9:9 MEV

Who does that? I mean, if you were busy at your job and some guy you had never met came along and said: "follow me," most likely you would think he was crazy and quickly decline the invitation. However, you wouldn't if something greater was at play, something like the grace of God. It is similar to the time when Jesus told Peter: "flesh and blood didn't reveal this to you, but my Father in heaven." (Matthew 16:17). We know that God is sovereign, and that only He can open the eyes of the blind, the ears of the deaf, and raise the dead (John 11:38-44). Now can a man resist? Well, that is something for another time. It's obvious through observation and Scripture that people seem to taste the gift and then "fall away," but we don't truly know to what extent. I personally think that if anyone truly could see Jesus and who He was couldn't resist. Like Matthew, they would just get up and follow.

One of the main things that we observe here in the text is that the thief on the cross should give us all hope that it is "never" too late, and that God can save anyone. We also see that even in the last hours something happened to open the eyes of this man to see Jesus for who He was, and it was more than just natural insight. We also see that though he wasn't baptized with water, he was Baptized by the Spirit of God, and responded based on that act of Divine illumination. I pray that today your eyes will be opened to see the matchless grace of God, and you are not beyond the grasp of God.
Grace Mercy Salvation Sovereignty of God