The Ante-Nicene Fathers Had No Eschatological System 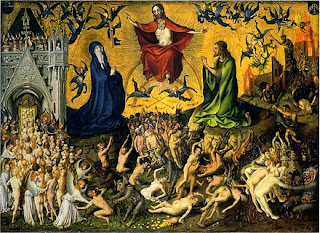 Contrary to what you might read on the wide web, the Apostolic and Ante-Nicene Fathers didn't have an organized eschatological system. In fact, they didn't have much Systematic Theology outside Holy Writ, the early Creeds, and the Didache. The Dialogue with Trypho written by Justin Martyr (A.D. 100-165) teaches three main points. #1 - the Old Covenant is passing away to make place for the New. #2 - the Logos is the God of the Old Testament. #3 - believers among the Nations (Including Jews) are the new Israel.
Dispensational Premillennialists try very hard to adopt the Early Church Fathers into their club. While Justin Martyr, Irenaeus, and Hippolytus were all what we now would call Historic Premillennialists (They didn't know what that was), the rest fell more into various interpretive methods that we now would call Futurism, Preterism, Historicism, and Idealism. There was little systematic organization. These methods were employed simultaneously depending on the audience and occasion for writing. Irenaeus and his pupil Hippolytus were the only two closest to the Dispensational view, and I suppose they could adopt them. They held to the unique and rare view for their time that Daniel's 70th week hadn't been fulfilled (Daniel Chapter 9). However, those two also made predictions that obviously didn't come to pass. Hippolytus predicted that Christ would establish the Millennium in 496, and Irenaeus said the following:


"(6) This is an account of the things formerly created, as also it is a prophecy of what is to come. For the day of the Lord is as a thousand years;(7) and in six days created things were completed: it is evident, therefore, that they will come to an end at the sixth thousand year." (Against Heresies, 5:28:3) [Note- This position failed, as the year 1994 was the 2000th year since Christ's birth)

Just like those who have made predictions concerning the Lord's return in our time, they did the same and failed in their prediction. Now I don't think one should throw out the baby with the bathwater. Irenaeus was a disciple of Polycarp, who was a disciple of John the Apostle, and was an excellent writer and teacher of the written word. His writings against Gnosticism are excellent and needed still today since Gnosticism has revived. Hippolytus was also an excellent writer and expositor of the Scriptures. Just like many who preach and teach today, we all have flaws in things we understand and believe. We also don't know for sure if they didn't alter their views later on. Many followers of Jesus I know have varied on issues as they have grown in the faith (myself included).
Justin Martyr was a little different than Irenaeus and Hippolytus. While he held to a literal 1,000 year reign of Christ like they did, he did believe that Daniel's 70 weeks interpretation had been fulfilled in A.D. 70 like the rest during his era and after. Many who are trying to prove a Theological point usually prevaricate and will tell you what they want you to know about the issue, the history of it, and what the Fathers believed. Without all of the evidence, an inaccurate picture is produced. It is tempting for me to "only" share with you the guys that agree with the position I have come to. However, it would be slightly dishonest for me to do that. I personally agree with Clement of Rome concerning his assessment of the issue, but I suppose we could be wrong (Clement was more like an Amillennialist.). All of that being said, what I have taken away from this is that one should not use the issue of eschatology or any other within this realm of Biblical interpretation to "break fellowship," or label someone as a heretic or apostate because they vary in their interpretation. As long as you have the Biblical position that Jesus wins in the end, we are good! One reason that I attend the church I do is that they are gracious concerning issues like these. I hold personally to what we today would call Amillennialism, but I attend church with many who would disagree with me. Historically, what I have shared are the facts. The only bone that I have to pick with Dispensationalists is their position of the "two peoples of God thing." There is no doubt that national Israel was special in their day (The vehicle of our Messiah), but after the Gospel of the Kingdom was revealed, we see that the true people of God all along were not children of the flesh, but children of faith (Romans 9:8/ Galatians 3:29/ Hebrews 11-12). That is why Ruth, Rahab, and several others in the Old Testament could be considered "Children of the Promise." Other than that issue and those who occasionally make false predictions, I have no major problem with the Dispensational view.
Resources for further study:


Who is Israel? What is a Jew? Where is Jerusalem?: A Biblical Mandate for Prophetic Reformation in the Twenty-First Century by Ph.D Hal Brunson


The Last Days according to Jesus: When Did Jesus Say He Would Return? R.C. Sproul