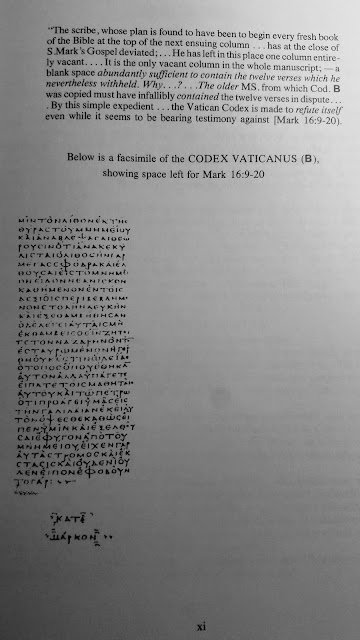 This audio file from Youtube lays out a brief history of the Modern Critical Greek Text, which is behind the ESV New Testament (My church uses it). There are a lot of things to address concerning the text, and Dr. Letis did an excellent job in my opinion.

The photo here is one of the ending of Mark and how it shows up in Vatacanus, also known as Codex B. As you can see, there is room for more. Scholars skeptically think that Mark 16:9-20 was a later addition. However, it is probable that the scribe here either deliberately left it out, or maybe wasn't able to finish. The absence of the text doesn't prove that Mark didn't write it, it only shows that the scribe in this instance didn't add it. The reason for it is known only by God Himself. Erasmus knew about this text when putting together his Greek New Testament, which reflected the preserved tradition of Scripture up to that point. Erasmus said that the text of Vatacanus was a "Latinized text," and therefore he wouldn't use it in his Greek New Testament. It wasn't until the Enlightenment era that the minds of men changed, and the Bible began to become suspect to Protestants. Codex Vatacanus, along with its counterpart Codex Sinaiticus is a local text that can only find history in Northern Africa. The reason for preservation of this text has to do with the arid climate of North Africa.

The text behind the Traditional Greek Text has use beyond Egypt. In fact from the 4th century forward, there is no trace of these obscure Egyptian texts being used in any branch of the church. I am suspect of the "new tradition" that is being promoted. While I believe that my brothers and sisters in Christ who use the ESV and translations from the "Modern Critical Greek Text" are believing and well meaning, and that God still uses these edited texts to reach out to men, I personally believe the text is incomplete and inaccurate. Vatacanus and Sinaiticus in their raw form resembles more accurately early Gnostic and Marcionite theology than Orthodox Christian teaching.